By Robert Norris, The Daily Times — 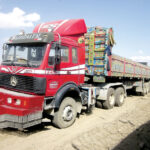 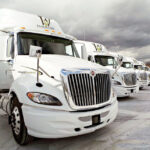 Vanquish Worldwide. The name evokes power and distance with a sense of precision and vagueness all at once. Sort of like the military. That’s no coincidence.

Consider the founder, president and CEO. Eric Barton spent 11 years in the U.S. Marine Corps. He intended to make a career of the corps. Stuff happened.
Stuff happening today includes a ribbon-cutting at Vanquish Worldwide’s new headquarters, 235 S. Old Glory Road, Maryville. The event will last 3 p.m.-6 p.m. with the ribbon sliced at 4 p.m. There will be refreshments, music, door prizes, even exotic horses.

Vanquish Worldwide describes itself as “an asset-based premier transportation provider that delivers a wide variety and the highest level of transportation and logistic solutions for government and commercial clients.”

Here’s what Barton calls his elevator speech: “We’re a supply team management government contracting firm. What we do is deliver excellence to our clients.” The stuff they deliver includes fuel, food, ammunition, armored vehicles — all sorts of materiel the U.S. government moves around Afghanistan.

“Our mantra in our years overseas has been: Support the war fighter forward in developing nations in hostile environments. That means a lot of things to a lot of different people. But we support the war fighter in the mission they have, which means beans, bullets, Band-aids, transportation, helicopter support,” Barton said. “That’s been something we’re very proud of. To do something you really love to do that’s challenging, diverse, means something.”

It started when Barton joined the Marines at age 17. He was a “satellite technician for five years, got a meritorious commission, spent the last six years as an intelligence officer, had a sniper platoon for a couple of years, did a few pumps (deployments). Spent my last two years in Horn of Africa traveling around gathering intelligence for war.

“Which helped me out tremendously as I got out later on and went to seminary and transitioned to government contracting. It wasn’t planned.”

So naturally, Barton ended in seminary school in Atlanta and worked as a youth pastor in Conyers, Ga. His career path is anything but boring.

“Writing his bio can be challenging at times,” said Dawn White, sales and marketing manager for Vanquish Worldwide.

White outlined what’s happening now at the company. Vanquish has just been awarded a National Afghan Trucking contract (NAT 1.5) in Afghanistan — one of seven contractors selected for the more than $200 million deal. Vanquish’s cut will be $37 million. The company also just landed a Corps of Engineers HVAC contract in Loudon.

As U.S. involvement in Afghanistan winds down, the company is expanding into commercial trucking. It has contracted with FedEx and has trucks at the delivery firm’s Nashville terminal. It’s on schedule to add 11 FedEx trucks with drivers at the Knoxville terminal by the end of June. The company plans to acquire another trucking company and its 23 trucks in August.

As part of its diversification, Vanquish Worldwide has a couple of subsidiaries, Front Range Training & Consulting LLC. That sister firm recently completed a class training U.S. Air Force airmen to be aides for three- and four-star generals. New law enforcement training classes are filling up now in the Western U.S., and the company is looking into SWAT training for East Tennessee law enforcement, White said.

Equine leadership? It doesn’t seem so outside the box considering Barton also has LexLin Gypsy Ranch in Rockwood. Barton said it is the largest Gypsy Vanner horse farm in the U.S. The breed of draft horses (think of small Clydesdales) comes from England, Ireland and Wales.

LexLin Ranch recently sold more than $75,000 worth of horses in one month. The ranch plans to make 30 horse donations over the next two years to therapy centers. The gentle nature of the breed makes Gypsy Vanners well-suited for equine therapy for recovering military as well as autistic and special needs children. A horse auction is planned for July 26, with 50 percent of the proceeds going to Smoky Mountain Service Dogs.

White cited a number of other community involvement and charitable contributions, ranging from United Way of Blount County, to Foothills Land Conservancy, to Keep Blount Beautiful, to the Marine Corps Scholarship Foundation, where Barton established an endowment of $100,000 and matches other donations that come in dollar for dollar.

On the job in Iraq

It’s a lack of dollars that eventually turned Barton into a businessman. He had planned to rejoin the Marines after seminary school, but while in Atlanta he and his wife, Mechelle, found themselves in a 900-square-foot apartment with five kids and in debt. Two of the children had been adopted from Ethiopia, where Barton met the founder of Americans for African Adoptions.

“So I started going to job fairs, and I found a guy that had a contract in Iraq making decent money — more than I’d ever made before, that’s for sure. So I said, I’ll take it.”

He’d never seen a government contract, but Barton ended up being the first contract manager for the company.

“We were very successful. In fact they went from a $40 million company to $285 million in a year-and-a-half,” Barton said.

Barton quit that job, deciding to start a business of his own. He was familiar with East Tennessee because he, an Illinois native, and his wife, from North Carolina, had often driven through Knoxville. They moved to Friendsville, where he founded his first company in 2006, Relyant, “a global provider of solutions to complex projects.”

Over the years Barton founded, closed, bought and sold several companies. Now, with Vanquish Worldwide at the core and Front Range Training and Peak Technical Institute as wing firms, Baron is adjusting to a business environment less reliant on government contracts.

“All three companies share the same thought process of delivery excellence to the client. It’s important for us, how we do business and how we treat our customers — make sure we’re asked to come back again. It’s a long-term vision not a short-term profit,” Barton said.

It’s almost like playing a pinball machine with three balls bouncing down the table at once.

“It’s the symphony in the chaos, that’s for sure,” Barton said.

Find the story online at: TheDailyTimes.com